When the Nazis came to power, policy towards the Freemasons was equivocal. Efforts to eliminate Freemasons did not receive top priority. Those lodges that espoused tolerance and equality and had international connections or connections through their leaders to the Social Democrats or liberal democrats were subject to persecution and often pressured into “voluntary” dissolution. A few conservative German lodges that were willing to accommodate themselves to the regime were able to continue some form of existence for only a little longer. Nevertheless, the regime intended to exclude those who refused to give up their Masonic connections.

In early 1934, the chief of the Nazi Party Court System ruled that Masons who did not leave their lodges prior to January 30, 1933, could not join the Nazi Party. That same month, Prussian Minister of the Interior Hermann Goering issued a decree calling upon the lodges to “voluntarily” dissolve, but requiring such voluntary actions to be submitted to him for approval. In addition, lodges and their branches in various cities throughout Germany were exposed to arbitrary violence from local SS and SA units, though this terror does not appear to have been centrally directed.

Increasing pressure in the public and professional sectors forced individuals to choose between remaining in their lodges or limiting their career opportunities. Many former lodge members holding positions in the civil service were forced or harassed into retirement. In May 1934, the Ministry of Defense banned membership in lodges to all personnel—soldiers and civilian employees. During the summer of 1934, after Heinrich Himmler and Reinhard Heydrich completed their takeover and centralization of the Gestapo, the German police forcibly closed down many Masonic lodges and branch headquarters of the Masons and confiscated their assets, including their libraries and archives.

On October 28, 1934, Reich Minister of the Interior Wilhelm Frick issued a decree defining the lodges as “hostile to the state” and hence subject to having their assets confiscated. Finally, on August 17, 1935, citing the authority of the Reichstag Fire Decree, Frick ordered all remaining lodges and branches dissolved and their assets confiscated. 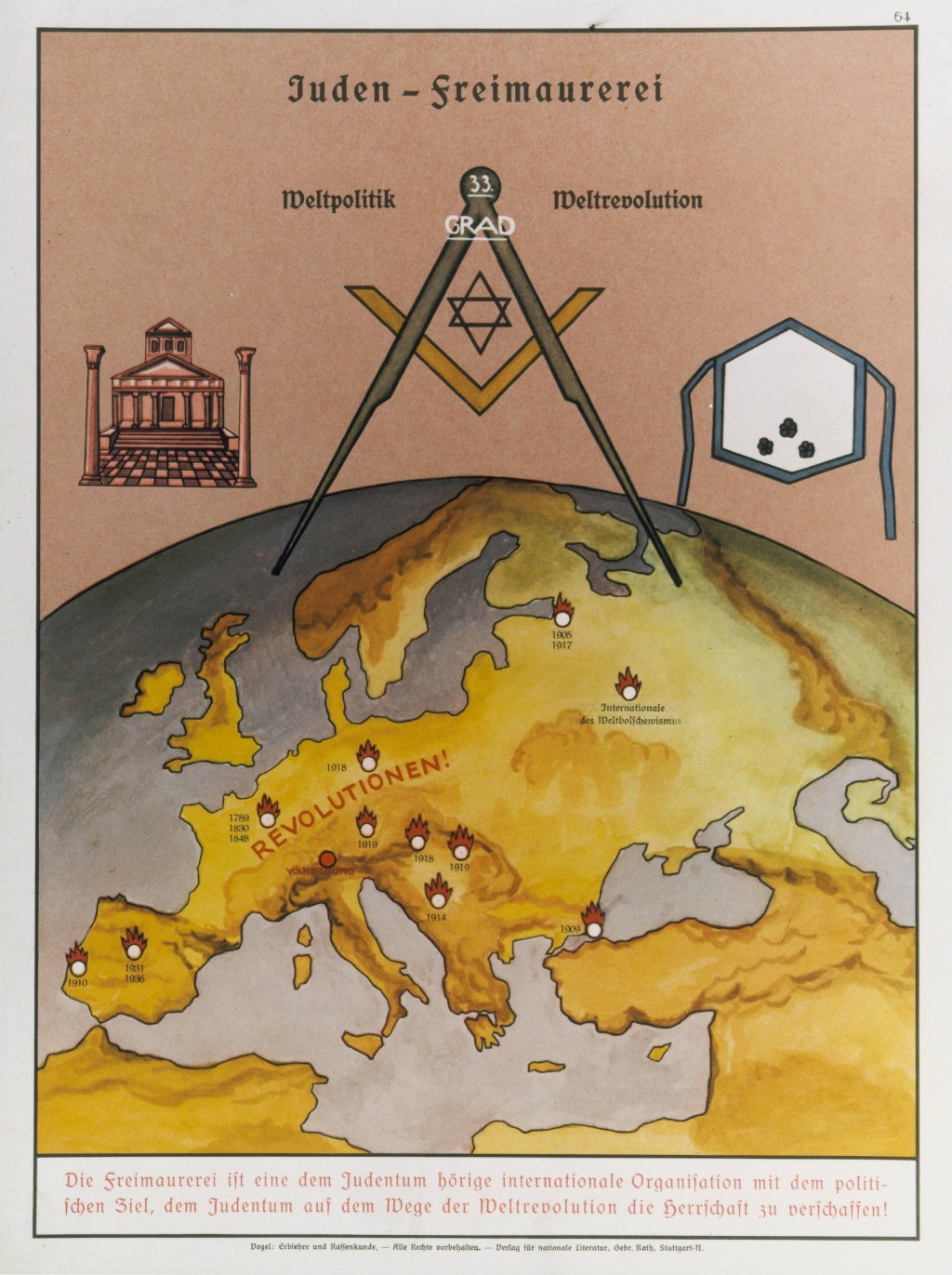 Eugenics poster entitled “The relationship between Jews and Freemasons.” The text at the top reads: “World politics World revolution.” The text at the bottom reads, “Freemasonry is an international organization beholden to Jewry with the political goal of establishing Jewish domination through world-wide revolution.” The map, decorated with Masonic symbols (temple, square, and apron), shows where revolutions took place in Europe from the French Revolution in 1789 through the German Revolution in 1919. This poster is no. 64 in a series entitled Erblehre und Rassenkunde (Theory of Inheritance and Racial Hygiene), published by the Verlag fuer nationale Literatur (Publisher for National Literature), Stuttgart, Germany, ca. 1935.

Nazi propaganda continued to link Jews and Freemasons; Julius Streicher‘s virulent publication Der Stuermer (The Assault Trooper) repeatedly printed cartoons and articles that attempted to portray a “Jewish-Masonic” conspiracy. Freemasonry also became a particular obsession of the chief of Security Police and SD, Reinhard Heydrich, who counted the Masons, along with the Jews and the political clergy, as the “most implacable enemies of the German race.” In 1935 Heydrich argued for the need to eliminate not only the visible manifestations of these “enemies,” but to root out from every German the “indirect influence of the Jewish spirit”—“a Jewish, liberal, and Masonic infectious residue that remains in the unconscious of many, above all in the academic and intellectual world.”Heydrich created a special section of the SS Security Service (Sicherheitsdienst; SD), Section II/111, to deal specifically with Freemasonry. The SD was particularly interested, as its personnel believed that Freemasonry exercised actual political power, shaped public opinion through control of the press, and was thus in a position to provoke war, subversion, and revolution. Later, Section VII B 1 of the Reich Security Main Office (Reichssicherheitshauptamt; RSHA), an amalgamation of the SD and the Security Police formed in 1939, took over the section devoted to investigating Freemasonry.

As Nazi Germany prepared for war in 1937–1938, the regime relaxed pressure on the rank and file of the dissolved lodges. Hitler amnestied members of the rank and file who renounced their former loyalties in April 1938 and efforts were made in the public sector to decide on continued employment of former lodge members on a case to case basis. Many civil servants who had been forced to retire due to their Masonic connections were recalled into service after the war began and the ban on former Masons serving in the Wehrmacht (German armed forces), even at the officer rank, was relaxed. The Nazi Party continued to ban former Masons from membership, though exceptions were made after 1938 in both the Nazi Party and even the SS.

As they conquered Europe, the Germans forcibly dissolved Masonic organizations and confiscated their assets and documents wherever they established an occupation regime. After a lodge was closed, it was ransacked for membership lists, important library and archival items, furnishings, and other cultural artifacts. Items seized would be sent on to the appropriate German agency, primarily the SD and later, the RSHA. 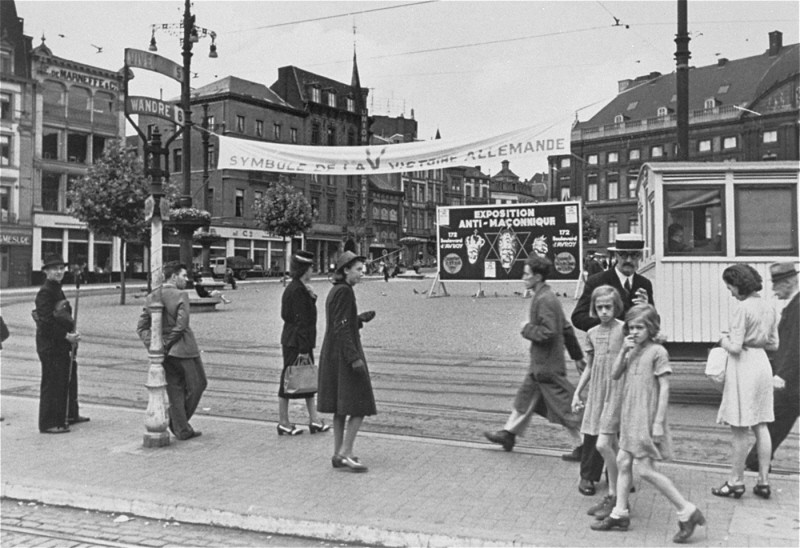 As part of their propaganda campaign against Freemasonry, the Nazis and other local right-wing organizations mounted anti-Masonic exhibitions throughout occupied Europe. German-occupied Paris hosted an anti-Masonic exhibition in October 1940, as did German-occupied Brussels in February 1941. Displaying Masonic ritual and cultural artifacts stolen from lodges, such exhibitions aimed to ridicule and direct hatred towards Freemasons and to heighten fears of a Jewish-Masonic conspiracy. German wartime propaganda, particularly in the army, charged that the Jews and Masons had provoked World War II and were responsible for the policies of US President Franklin D.Roosevelt, who was identified as a Freemason.Some of Germany’s Axis partners decreed police and discriminatory measures against Masons. In August 1940, the Vichy France regime issued a decree declaring Masons to be enemies of the state and authorizing police surveillance of them. The French wartime authorities even created a card file that identified all members of the Grand Orient of France, a leading French Masonic organization. The card file survived the war and was later microfilmed for the holdings of the United States Holocaust Memorial Museum Archives.

In 1942, Alfred Rosenberg was authorized by a Hitler decree to wage an “intellectual war” against the Jews and Freemasons. To that end, Hitler permitted Rosenberg’s “Deployment Staff of Reich Leader Rosenberg (Einsatzstab Reichsleiter Rosenberg; ERR) to seize and evaluate Masonic archives and libraries to best equip them to carry on the “methodical intellectual fight” that was “necessary to win the war.” The members of ERR were guaranteed the support of the High Command of the German Armed Forces (Oberkommando der Wehrmacht; OKW) in fulfilling their mission.

After the end of World War II, vast collections of Masonic archives and library collections that had been seized by German authorities were captured, in turn, by Allied and Soviet forces. For example, a significant Masonic archive was found in Silesia, in eastern Germany, by Soviet troops in the last days of World War II. The Soviet authorities shipped the records to Moscow, where they were held in secret archives. Other Masonic-related materials were recovered in Poland. Some of this material has been microfilmed and stored in the archive of the United States Holocaust Memorial Museum. Since the end of the Cold War, many Masonic-related collections have been returned to their countries of origin, while others continue to be held in foreign repositories.

Because many of the Freemasons who were arrested were also Jews and/or members of the political opposition, it is not known how many individuals were placed in Nazi concentration camps and/or were targeted only because they were Freemasons. Some former lodge members, as individuals, participated in or were associated with German resistance circles. Some were arrested and murdered during World War II.